Early prototype of Q19 has been released! 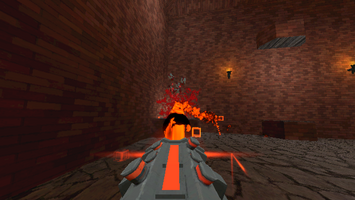 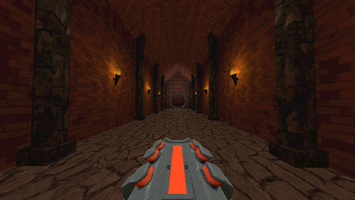 I've always loved interesting movement mechanics, from rocket jumping and bunny hopping in Quake to the forward movement in Perfect Stride. So I wanted combine fast movement where you never stop with shooting enemies in a looping level where you ultimately are trying to nail the perfect run.

So I made a prototype to test out the idea and even though it's rough I have a feeling that it works. Try it out yourself and see if you agree!

There is only one level and your goal is to get through it as fast as you absolutely can, boosting forward and killing enemies to gain energy to boost more.

Lets talk a little bit about the design.

The movement system is a bit different than the normal WASD, one of my core design goals was "never stop" and WASD is a bit more prone to stopping and starting movement. And like with bunny hopping and other skillbased movement I wanted to have movement as something with a high skill ceiling.

With it's forward movement it forces you to always be on the move or you'll lose your accrued speed.

But this was to be a shooter, one where everything feeds into you going faster and completing a lap faster. Aiming and timing shots together can get tricky when trying to kill enemies, even more so when going at high speeds. So I just removed one part of that equation by removed timing of shots, solved by you having a giant lazer weapon.

That also fit another design issue I had, how do you aim at enemies to your side when you always move in the direction you're looking? You don't want to go into the wall just because you killed an enemy. To solve that I made it so that when you're firing you lock your current forward movement to the direction you had when you started firing.

It takes a little while to get used to but it works very well and actually adds another small task when firing, making sure you align yourself correctly before firing. And to give you some extra breathing room when firing I added some slow motion when you're firing.

There you have it, a little about my design process of this prototype. There are still things to talk about like art direction, the looping levels, balancing the game, possible future plans, etc. But that'll have to wait until next time, take care!

(oh, and don't forget to try out the game yourself!)